A highly effective and economical fungicide, insecticide and miticide. 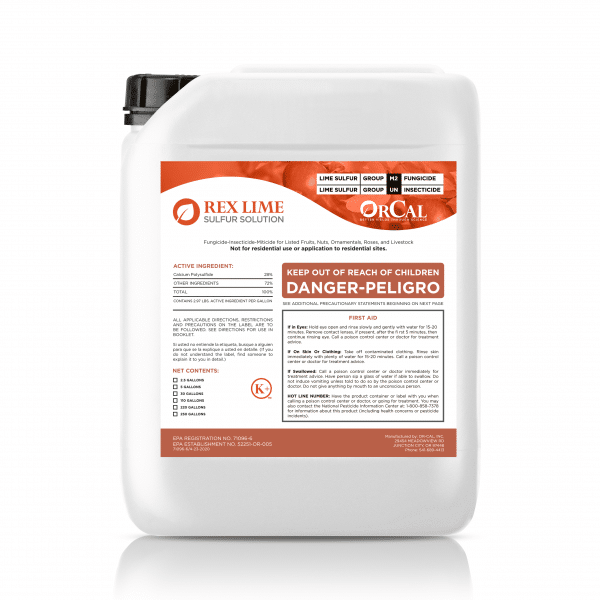 Are you looking to diversify the IPM scheme for your fungicide/insecticide/miticide spray program?   Lime sulfur has been used for over 150 years; once the standard by which all other fungicides were gauged, it still performs today as it always did; it’s physical mode of action to destroy pests keeps them from coming up with ways to build resistance.

Start off clean in the spring! REX LIME SULFUR SOLUTION is exceptional in cleaning up overwintering pests from the ground floor to the top of the crop.

In 1910 when it was first being introduced into America’s horticultural crops, research entomologist A.B. Cordley wrote in the Oregon State Extension Bulletin #108: “As a winter spray one application of lime-sulfur spray each year will do more for the neglected orchard than can be done in any other way by the same expenditure of cash or energy…The best winter spraying is immediately after the leaves drop in the fall—even before they are all off.”

(Optional…Winter applications target newly deposited spores, fungal parts and insects that over-winter on dead or dying leaves, twigs, and on the exfoliation bark of vines and trees).

REX LIME SULFUR SOLUTION is safe in organic and conventional agriculture, according to the EPA Revised Re-registration Eligibility Decision for Inorganic Polysulfides (September 2011): lime sulfur rapidly changes into sulfur, calcium hydroxide (slaked lime) and gypsum. “In the soil system, the modest amounts of calcium and sulfur that result from the use of calcium polysulfide are not believed to be significant when compared to their respective natural background levels.[1] Unlike other pesticides for which EPA has followed a cumulative risk…EPA has not made a common mechanism of toxicity finding as to calcium polysulfide.”[2]  As for sulfur, “the human risks, if any, from both dietary and occupational exposures are considered to be very low because of the general knowledge of the chemical sulfur, its ubiquitous occurrence, and its low toxicity, as well as its long history of use by humans, including some pharmaceutical applications.”[3] There is a wide spread use of calcium hydroxide in the food supply.  Due to the rapid dissociation of lime sulfur into “components with very low toxicity, no mitigation for freshwater fish, mammals or avian species is warranted at this time.” Other than skin and eye irritation of the spray, lime sulfur “would not present a human health hazard to the general public.”[4]

This website uses cookies to improve your experience while you navigate through the website. Out of these, the cookies that are categorized as necessary are stored on your browser as they are essential for the working of basic functionalities of the website. We also use third-party cookies that help us analyze and understand how you use this website. These cookies will be stored in your browser only with your consent. You also have the option to opt-out of these cookies. But opting out of some of these cookies may affect your browsing experience.
Necessary Always Enabled
Necessary cookies are absolutely essential for the website to function properly. These cookies ensure basic functionalities and security features of the website, anonymously.
Functional
Functional cookies help to perform certain functionalities like sharing the content of the website on social media platforms, collect feedbacks, and other third-party features.
Performance
Performance cookies are used to understand and analyze the key performance indexes of the website which helps in delivering a better user experience for the visitors.
Analytics
Analytical cookies are used to understand how visitors interact with the website. These cookies help provide information on metrics the number of visitors, bounce rate, traffic source, etc.
Advertisement
Advertisement cookies are used to provide visitors with relevant ads and marketing campaigns. These cookies track visitors across websites and collect information to provide customized ads.
Others
Other uncategorized cookies are those that are being analyzed and have not been classified into a category as yet.
SAVE & ACCEPT